The VP's Night Out

No doubt you've heard this story, about Mike Pence being booed when he attended a performance of Hamilton. He also got a lecture from the cast:

At the conclusion of the show, cast members addressed Pence’s appearance — as a group locked in hand-to-hand — behind Brandon Victor Dixon who delivered the following message:

“Vice-president elect Mike Pence, we welcome you and truly thank you for joining us at Hamilton American Musical,” Dixon, who plays Aaron Burr, the nation’s third vice president, said. “We sir, we are the diverse America who are alarmed and anxious that your new administration will not protect us, our planet, our children, our parents, or defend us and uphold our alienable rights, sir. We truly hope that this show has inspired you to uphold our American values and to work on behalf of all of us,” Dixon added. “We truly thank you for sharing this show, this wonderful American story told by a diverse group of men, women of different colors, creeds and orientation,” Dixon concluded to a roaring applause by those in attendance.

(Video at the link.)

Needless to say, Il Duce Junior was not pleased:

The Theater must always be a safe and special place.The cast of Hamilton was very rude last night to a very good man, Mike Pence. Apologize!

Our wonderful future V.P. Mike Pence was harassed last night at the theater by the cast of Hamilton, cameras blazing.This should not happen!

Apparently, some of the reporters at NYT thought this was beyond the pale: 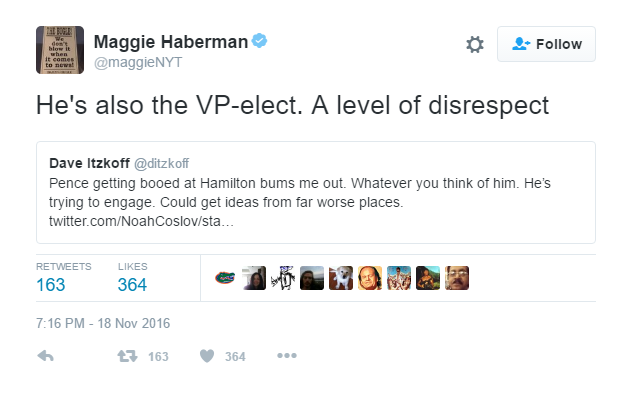 Digby has the best response to that:

I'm afraid I have to agree. Booing is very rude. What you're supposed to do is chant "lock him up!" and scream "Trump that bitch!" It's also fine to call him "nasty" to his face. This booing, however, is disrespectful.

Of course, all the usual suspects are jumping on the bandwagon. But if you read through the tweets at the link, you'll notice how none of them address the substance of the situation: The man is a well-known bigot, viciously anti-gay, attending a performance that is all about the diversity that is America.

Oh, wait -- this is the segment of American politics that thinks Nazis are OK.

Pence paid something like $1200 for each seat the other night. The cheapest ticket in the house is $250 (and it's sold out until July of next year). He probably thinks his kind of spending insulates him from curtain speeches, but they are an age-old tradition in theatre, as is audience participation in either applause or booing-catcalling for/against newsworthy public figures who attend. Did he run whining to Daddy about his reception? Is Daddy so thin-skinned and uncultured he had to respond?