It all comes together

You've probably noticed that I've been focusing a lot on gay superheroes in comics lately, and marriage is a long-term issue here. So of course, I love this story:

Midtown Comics, a hub for New York City comic book fans, has been the site of many news conferences, book signings and midnight sales.

On Wednesday, the store will have its first wedding.

In honor of the release of “Astonishing X-Men No. 51,” in which the mutant superhero Northstar marries his boyfriend Kyle, Midtown Comics will present the wedding of Scott Everhart, 39, and Jason Welker, 33, a couple from Columbus, Ohio, who were selected from more than 50 applicants.

Which reminds me -- I have to get to the comics store. 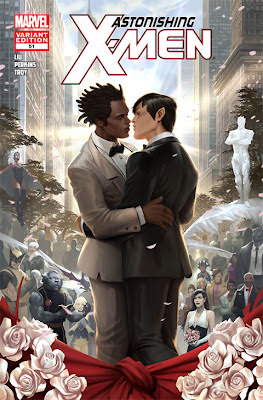