I haven't given a Through the Looking Glass Award in some time, but I can't think of a more deserving person than Buddy Smith of the American Family Association. You may have heard that Mississippi has passed what we shall call "The Religious Freedom Restoration Act," because that's it's name -- it's the Mississippi version of Arizona's license to discriminate bill, the one that Gov. Jan Brewer vetoed.

No, that's not the Through the Looking Glass part. It could be, but believe me, this gets better. 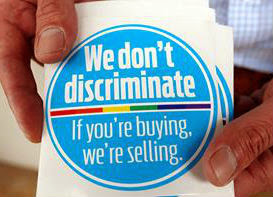 Well, some business owners in Mississippi have responded to the "restoration" of some people's "religious freedom" by creating a nice little blue and white sticker that incorporates a rainbow stripe:

This was apparently too close to being thrown to the lions for Mr. Smith:

"It's not really a buying campaign, but it's a bully campaign," he says, "and it's being carried out by radical homosexual activists who intend to trample the freedom of Christians to live according to the dictates of scripture.

"They don't want to hear that homosexuality is sinful behavior – and they wish to silence Christians and the church who dare to believe this truth."

Smith offers a word of caution for those who do business with facilities posting the decal supporting homosexual activism. "If you do that, you are agreeing with these businesses that Christians no longer have the freedom to live out the dictates of their Christian faith and conscience," he tells OneNewsNow.

Please don't ask me how Buddy Smith got from a sticker displayed by businesses that don't discriminate to a bullying campaign against Christians -- excuse me, I mean "Christians," because I don't have an explanation. I doubt there is one, except maybe that, like other anti-gay "religious" groups, AFA is seeing its donations tank.

Couldn't happen to a better group of people.

No, I am not going to link to OneNewsNow, but if you want to see Timothy Kincaid's take on this story, it's here.

And you may congratulate me -- I didn't leave a comment at OneNewsNow -- I don't have time these days to engage in flame wars with a bunch of -- well, I'm not going to call names. I don't think I need to.

Posted by Hunter at 6:28 PM No comments:

The lead story, of course, is NOM stamping its feet and holding its breath.

Sort of. Still a lot of unpacking and organizing to do, but decided to take a break and lucked out.


Check out Towleroad for the scoop.

Posted by Hunter at 6:11 PM No comments:

Fortunately, this one's easy. I'm exhausted, and I cut my left little finger very badly, which means because of the bandage, I keep hitting "CAPS LOCK" by mistake.

Anyway, on to Matt Baume:

Posted by Hunter at 6:08 AM No comments:

I haven't posted for a looong time. I moved. It was horrible.

And it seems like I've read all the news stories before -- several times.

Give me a few days.

Posted by Hunter at 7:18 AM No comments:

With, of course, the adorable Matt Baume:

Posted by Hunter at 7:11 AM No comments:

Paul Ryan Has Another Budget

And it's even worse than the last one. Bernie Sanders sounds off:


I don't know the details of Ryan's "new" budget, but given his past performance, I can guess. I doubt that it has any redeeming qualities at all (unless you're worth a few hundred million -- or a military contractor).

And I wonder how much it's going to increase the deficit.

Here's some commentary by Digby, taking off from this news report. This is good:

Republicans say the new "premium support" system for future Medicare retirees who are now 55 or younger would prevent the budget from spiraling out of control as more baby boomers retire and the present system collapses. They also say the redesigned Medicare program would offer seniors more choices and curb costs.

The doomsday scenario is good -- Medicare "spiraling out of control"? Is it any wonder no one except Fox News junkies takes this seriously?

Oh, and the part about repealing the ACA? Read this. Because it is so totally not working.

On Brendan Eich, Public Discourse, and the "Gaystapo"

I'm preparing to move, which is why I haven't been posting much lately, and why I haven't commented on the whole Brendan Eich/Mozilla brouhaha -- I've been ambivalent about the whole outcry, dismayed by the vitriol in the comments of a few blogs that usually have intelligent discussions, and just too distracted to write anything coherent about it. There have, however, been a couple of good posts on the lot of issues around this whole event. Rob Tisinai has written one of the clearest at Box Turtle Bulletin.

Posted by Hunter at 4:49 AM No comments:

22 million years. I had no idea hummingbirds had been around that long. And they've been very successful at being hummingbirds.

The Andes Mountains are a particular hotspot for hummingbird evolution, because diversification occurred along with the uplift of those peaks over the past 10 million years. About 140 hummingbird species live in the Andes today.

Hummingbirds are the major, if not only, pollinators for certain species of orchids, which, funny thing, also show remarkable diversity and adaptation in the Andes. Hummingbirds are, however, a New World phenomenon. Their niche as orchid pollinators in the Old World seems to be largely the province of certain species of moths. Well, where there' a niche, there's an organism, I always say.

(Not that hummingbirds pollinate only orchids, or that orchids are only pollinated by hummingbirds. But there's a strong relationship among certain species, and a lot of evidence for co-evolution.)

And a little bit of a romantic vision, courtesy of Martin Johnson Heade (who did a lot of paintings of orchids and hummingbirds, if I remember correctly):

Posted by Hunter at 7:19 AM No comments:

Another Day, Another Page

Sometimes I surprise myself. I'll let you guess what that means.

Posted by Hunter at 8:23 AM No comments:

From noted Constitutional scholar Louie Gohmert (R-Nowhere on this planet):


Gohmert pointed out that a Congressional Research Service report revealed that President Thomas Jefferson, who coined the phrase "separation of church and state," had also attended church services at Statuary Hall.

"But it was to be a one-way wall, where the state would not dictate to the church," the Texas Republican insisted. "But the church would certainly play a role in the state."

Somehow, using Thomas Jefferson as an example of an observant Christian betrays a certain lack of familiarity with the man.

And, as one commenter asked, "Whose church?" You do notice, I trust, that Gohmert's little "historical example" is all about Christianity. Sort of leaves the rest of us out in the cold, doesn't it?

Posted by Hunter at 7:40 AM No comments: