I don't have anything to add:


Although the puppy's cute, too.

Life has a way of happening, sometimes.

Posted by Hunter at 6:25 AM No comments:

Alabama has sent a minister to jail for 30 days for defying a local judge and marrying a lesbian couple. Irish voters support marriage equality in a landslide, but marriage could still start in America before they start in Ireland. And one more study shows support for equality on the rise.

Actually, the Irish government has already started drafting the necessary legislation with an eye toward having it passed before summer.

Work will begin this week to give effect to the referendum decision to amend the Constitution with the first same-sex marriages likely to take place as early as September.

Tánaiste Joan Burton said legislation would be brought before the Seanad and Dáil as early as possible, with the aim of getting it passed before the summer recess.

“That would mean that we would be in a position to have same-sex marriage celebrations, civil ceremonies by, probably, September,” she told reporters at the Africa Day celebrations in the Phoenix Park.

Posted by Hunter at 6:24 AM No comments:

Texas is setting itself up for a showdown with the Supreme Court. A bill to defy the court's rulings died in the House last week, but anti-gay politicians could find a sneaky way to revive it. Meanwhile, the Attorney General of Texas refuses to say if he'll obey the Supreme Court's ruling in June.

I really have nothing to say, except maybe the armed forces should invade Texas.

Image(s) of the Week

It's hard to explain, sometimes, why I shoot the pictures I shoot. Call it instinct, refined by a lifetime of making visual images in one medium or another -- and studying the work of other artists, of course. (No one works in a vacuum.)

At any rate, a couple more from the "Skylines" series: 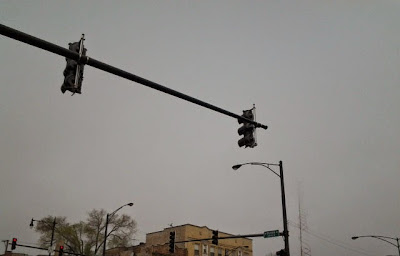 And minus the fog: 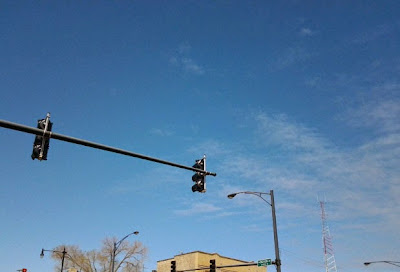 It's still about edges. And diagonals -- can't do without diagonals.

Posted by Hunter at 7:40 AM No comments:

And his "study" on people raised by gay parents? Except that almost none of them were:

In an upcoming article, a pair of sociologists are putting what they call the “final nail in the coffin” of the much-criticized study by University of Texas sociologist Mark Regnerus that purported to show that being raised by gay and lesbian parents harms children. The Regnerus study has become a favorite tool of Religious Right activists seeking to show that households led by same-sex couples are bad for children. At the same time, the study has come under scrutiny for the funding it received from anti-gay groups and for its lack of respondents who were actually raised in same-sex parent households.

Indiana University's Brian Powell and the University of Connecticut’s Simon Cheng didn’t just find methodological flaws in Regnerus’ research — they took the data he collected, cleaned it up, and redid the study, coming to a very different conclusion about families led by same-sex couples.

It seems that not only was the methodology flawed, but a significant portion of the data was suspect:

By eliminating suspect data — for example, a 25-year-old respondent who claimed to be 7’8” tall, 88 pounds, married 8 times and with 8 children, and another who reported having been arrested at age 1 — and correcting what they view as Regnerus’ methodological errors, Cheng and Powell found that Regnerus’ conclusions were so “fragile” that his data could just as easily show that children raised by gay and lesbian parents don’t face negative adult outcomes. . . .

Many people who he categorized as having been raised by a gay or lesbian parent had spent very little time with that parent or with his or her same-sex partner. Even Regnerus admitted that his data included only two people who said they had been raised for their entire childhoods by a same-sex couple.

There are also serious questions about the genesis and conduct of the study, as well as its publication -- why was it accepted for publication before the data analysis was complete? for example. (The article at the link strikes me as a little shrill, even verging on sensationalistic, but seems, ultimately, to be well-documented. A more concise and less slanted summary is at Wikipedia.)

Of course, this won't affect Anti-Gay, Inc.'s use of the study -- they'll just mutter something about "the gaystapo" and keep on citing it.

Texas lawmakers vote this week on whether the state should officially defy the Supreme Court's ruling on marriage. Alabama and Minnesota are debating bills to undermine marriage equality. At least one presidential candidate seems to think that if elected he could veto the Supreme Court. But a new survey shows that Americans are getting tired of these anti-gay shenanigans.

Posted by Hunter at 7:08 AM No comments:

Not to mention a free press. Geller, via Digby:

From everything I've seen, Al Jazeera is more reliable than, say, Fox News.

"Free speech for me, but not for thee" -- how very right-wing.

Posted by Hunter at 9:29 AM No comments:

"How to Talk to Your Kids About Bernie Sanders," by Kimberly Harrington.

And I really don't have anything to add.

Posted by Hunter at 9:08 AM No comments:

Labels: a sense of proportion, citizens' welfare, doing it right

Remember the straight guy in Las Vegas who asked his gay best friend to the prom? Well, here's a mini-documentary of the big night:


They're so cute I can barely stand it.

Posted by Hunter at 7:21 AM No comments:

Labels: the kids are all right

Well, Pam Geller got her wish:

Texas police shot dead two gunmen who opened fire on Sunday outside an exhibit of caricatures of the Prophet Mohammad that was organized by an anti-Islamic group and billed as a free-speech event. . . .

The exhibit was organized by Pamela Geller, president of the American Freedom Defense Initiative (AFDI). Her organization, which is described by the Southern Poverty Law Center as a hate group, has sponsored anti-Islamic advertising campaigns in transit systems across the country.

Organizers of the “Muhammad Art Exhibit and Contest” said the event was to promote freedom of expression. They offered a $10,000 prize for the best artwork or cartoon depicting the Prophet, as well as a $2,500 “People’s Choice Award.”

Depictions of the Prophet Mohammad are viewed as offensive in Islam, and Western art that portrays the Prophet has sometimes angered Muslims and provoked threats and attacks from radicals.

One thing we don't hear much about from the proponents of our "Constitutional rights" is the responsibility that goes with those rights. I mean, that's part of the deal, right? You exercise your right to free speech, but you also undertake to exercise that right in a responsible manner. After all, we live in a society in which everyone, at least theoretically, is equal and is treated fairly. The only way to make that work is for us to exercise some restraint. It's also known as "common courtesy."

It's really an infantile take on citizenship.

So, Pam Geller (who's a real piece of work -- a couple of her more outrageous escapades are noted in the article) wants to hold a "free speech" event deliberately designed to offend and insult Muslims? Well, that's her right.

And who's to blame if someone gets shot?

But you won't hear that from her -- she doesn't seem to be real big on taking responsibility.

This is sweet, and once again, another indicator of how badly the "Christian" right is losing hearts and minds. I'm not going to recap -- the whole story's in the clip:

Posted by Hunter at 7:30 AM No comments:

Labels: gay news, the kids are all right

Did It Again: Image of the Week

I really do try to post these on Fridays. In fact, I remember thinking this Friday past, "I have to post and 'Image of the Week'." And then, for some reason, I didn't. Well, here it is, from Bernice: 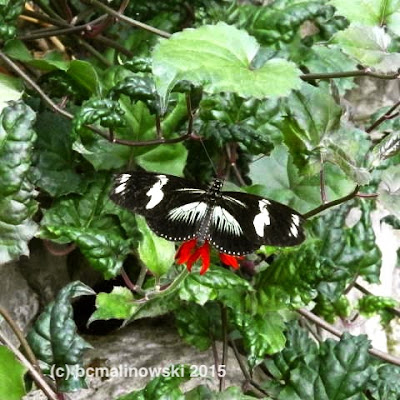 It's particularly appropriate right now because I've actually been seeing butterflies out in the park, and even around my neighborhood. Maybe we really will have summer. Eventually.

Posted by Hunter at 7:28 AM No comments:

To all the hysteria spewing forth from the usual suspects on same-sex marriage. This is the kind of story that, for the time being, is still news:

The Mussleman High School senior prom was held at The Heritage Hall in Inwood, West Virginia. Among the couples attending were Michael Martin, a Mussleman senior, and his boyfriend Logan Westrope, who attends Hedgesville High School.

In a rational world, there wouldn't be a story here: two kids go to a senior prom. Big deal. And in this case, it wasn't such a big deal:

"We knew this would be a night to remember," Logan told Outsports. "We walked in, checked in with our tickets, and were off to have fun! At first we were both a little hesitant to hold hands, not knowing how the rest of the student body would react. But after a short while, we were always next to each other and danced together the whole night. . . .

"We didn't hear any negative comments about Michael and I. A lot of people would come up to us (especially the girls) and say, 'You both are so cute!' or 'You guys look great!' Once we left the prom, I remember Michael saying to me in the car, 'Logan, this is our last prom and I'm so glad I got to spend it with you.' I couldn't have asked for a more perfect night." 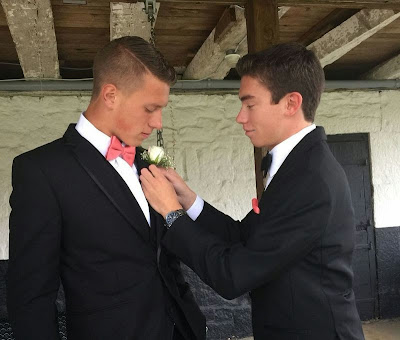 Read the whole story. Do.

Via The New Civil Rights Movement.

Posted by Hunter at 7:27 AM No comments: