Still Searching For the Bottom

Yeah. posting has been sporadic -- let's face it, the news is all Trump, all the time, and it's pretty depressing. But the regime keeps finding new lows to sink to: 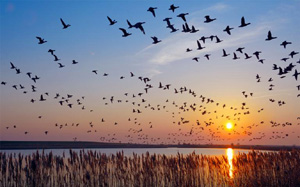 The Trump administration will move on Thursday to weaken a century-old law protecting migratory birds by dropping the threat of punishment to oil and gas companies, construction crews and other organizations that kill birds “incidentally” in the course of their operations.

With the outcome of November’s presidential election uncertain, the Trump administration is moving quickly to finalize dozens of regulatory rollbacks and other actions to weaken environmental protections viewed as burdensome by industry.

Let's face it, industry finds any regulation "burdensome". And it never occurs to Republicans that those regulations are in place because of past abuses. Ergo, if industry would behave responsibly to begin with, we wouldn't need so many regulations.

And Trump, I think, is running scared -- the more dirt that comes out during the impeachment "trial" (sarcasm quotes thanks to Moscow Mitch), the more his chances of winning in November shrink. Plus, there's always the possibility, remote as it is, that the Senate will vote to remove him. (Watch out for flying pigs.) And of course, there's his pathological hatred of Obama, which translates into undoing every beneficial policy enacted in the eight years previous to his coronation -- excuse me, I mean inauguration. (Hey, did you hear the one about land mines?)

So now we have a whole administration that mirrors its head: petty and vindictive. Not to mention crude and clumsy.

Both stories via Joe.My.God.

There's more on this story here.